PowerMD is now OPEN for appointments! Your health and well-being remain our primary concern. Please click here to learn what we're doing to prevent COVID-19 at PowerMD.

Dr. Karron Power is a nationally known medical expert who appears on numerous local and national TV news and talk shows to educate and inform viewers on non-surgical aesthetic treatments for women and men, anti-aging medicine and hormone therapies for both men and women.

Dr. Power recently appeared on ABC 7 News San Francisco in a story on injectable treatments to reduce a double chin. She describes how small areas of fat in the neck can be dissolved without surgery to create a sleeker neckline as she administers the treatment to a patient in her 60’s. Dr. Power also comments on Kybella, an injectable drug recently approved by the FDA for dissolving fat under the chin.

Dr. Power visited the set of Studio 11 LA at Fox News in Los Angeles to show the latest developments in hormone replacement therapy for men, soon after an appearance on the “Marie” show with Marie Osmond, also taped in Los Angeles. In the Marie show segment Dr. Power shows how facial lines and wrinkles are treated with natural growth factors which are derived from a person’s own blood processed in a centrifuge, then injected into the desired facial areas.

ABC World News Tonight and “Nightline” featured Dr. Power and a patient in “Fountain Of Youth”, a story on testosterone replacement therapy for men. The story shows how an entrepreneur who runs multiple companies is benefiting from his testosterone therapy. 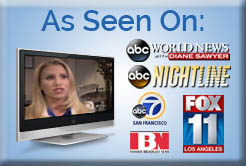